Jack: A Poem From The Darkened Tales Series That Tells The Real Story Of Jack The Ripper 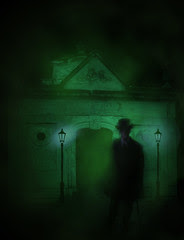 Jack: A Poem From The Darkened Tales Series That Tells The Real Story Of Jack The Ripper
The sound of heel on cobbled stone
That stalked the streets of yesteryear
As sewage flowed with soiled dreams
Jack would walk bereft of fear
His mind was caged and wrought with grief
As pain destroyed his inner eye
And cancers crept and clawed his soul
A lovers voice that hushed goodbye
A nothing moon that held no light
On darkened paths and brick red walls
And staggered coves would leave their slums
To rest in doors amongst the gloom
No bells would ring in East End homes
As night would fester cold and smog
And as his heels clicked on the stones
The hooves of carriages would trot
And on this night he saw her there
As charm would ‘tice a drunken Lord
Who’s sword was stiff between her thighs
Whilst shillings lined her wayward hoard
But in the dark on hidden streets
The stench that reared on soiled paths
Jack lay down his leather bag
And drew the tools that played their part
And as the Lord would hasten thrusts
Her teeth bit deep on glistened vein
And then the whites within her eyes
Would roll as blood was left to drain
And as he pulsed between her legs
She drank the life he clung on to
But from the shadows Jack would walk
And drive his stake so hard and true
The night was filled with eerie screams
As Lord fell hard and wrestled free
He turned and fled beyond the street
As Jack knelt down on bended knee
And with his skill he’d cut & slash
To take a heart of hardened stone
That led a path to darkened graves
For him to walk once more alone
**********************************
Image courtesy of walraven @ flickr
Share
|

Good one, Pete. I fell the chills.

Thanks for letting me know about the new blog. This has all the elements of great story and you have written it well..the depth of the characters, the passion of every emotion presents, a villian, a lover, a deliverer all here with just the right amount of twist to leave you wondering who is really who..and right before the end one leaves the scene leaving me to wonder what becomes of him? This is my favorite so far...one of those works you can read over and over and see something new each time..great work!

Congratulations on your new home. I hope the move wasn't too painful (as moves most often are).

P.S. I would like to "follow" you but I can't find any way to do it other than using Twitter. Since I am not a tweeter (twit?)...

Is there a way to follow using e-mail that I am missing?

Creepy poem and an interesting take on Jack the Ripper.

PS you forgot the .com in your blog address in the email you sent out -- page could not be found when I clicked the link.

Congratulations on your new page. Great work, I liked it :)
Warmly
Marinela

Congratulations on your new home Pete. You started out with a great erie poem. It was very scary with a great story line. Thank you for reading my grandson's story. He will be leaving you a thank you on the blog later this evening.

Jason left you a thank you.

A chilling poem on such a sunny day.. dark deep and powerful well written.

Eerie story Pete. I like it. Congrats on the new home. Hope you settle in well :)

This Poem is beautiful...The read was a cruise. I am loving your new Blog...will hit here more often.

Of course, what a great site and informative posts, I will add backlink – bookmark this site? Regards, Reader.